I’m alright, Jack! The rise of the T-shaped individual

The term ‘Jack of all trades – a master of none’ is typically seen as a less than flattering rebuke. Used in this manner it generally describes a person whose knowledge, while covering a number of areas, is superficial in all of them. In the current form the phrase can trace its heritage back to the 1700s. However, there is evidence to suggest that before the addition of “master of none” it was seen as a compliment for a person who is good at fixing and has a very good broad knowledge. It is that second view that I want to explore as we track the rise of the T-shaped individual in the modern digitally-driven organisation.

So, what is a T-shaped individual? I like this definition from 2005: “T-Shaped people are those with deep knowledge in one discipline, but at the same time a strong sense of curiosity for other disciplines and a will to learn from experience in other fields. They are ideal ‘cross-pollinators’.” (Kelley, 2005).

These people exist very successfully in many industries. My own brother is a time-served joiner. You name it and he can make it in wood and fit it where you want it. Windows, staircases, doors, porches, the list goes on. Over the years, he has picked up enough basic skill and appreciation of building, plumbing, electrical and other trades to allow him to know what he can tackle himself and when he needs to combine with other experts. If you ask, he will say his skills have grown by necessity, not design to let him get the job done. An accidental T-shaped person if you will. I’d argue that traditional IT departments have been very much the same. My own story of skills adoption is one of necessity over design, as my early days ranged through MVS, VME, Fortran, COBOL … to ITIL, PRINCE2, DevOps and Agile later on.

During the 1980s there came a point when it was decided that a Jack of all trades was a pretty good idea. Anecdotally, the term ‘T-shaped man’ was used internally by McKinsey & Company for recruiting and developing consultants and partners – men and women. Into the current millennium we see T-shaped skills as a very common occurrence in the agile software development world, referring to the need for cross-skilled developers and testers in an agile team. We talk of the 1:3/3:1 rule in Agile and DevOps teams: i.e. every 1 person can perform 3 activities and every 1 activity can be covered by 3 people.

The benefits of such a deliberate approach to creating specialist generalists in your teams can be summed up as follows:

T-shaped people allow us to cope with varied demand based on ACTUAL priorities. In this first scenario the order of work being done is based wholly on specialist availability. 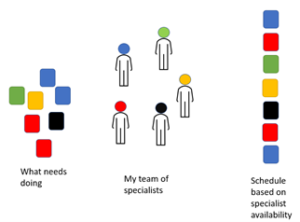 Contrast that with the situation where my team are T-shaped, where the same work can be scheduled based wholly on priority. 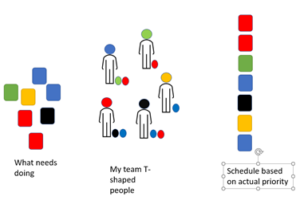 T-shaped teams will often be able to do more with the same number of people or indeed do the same with fewer people. 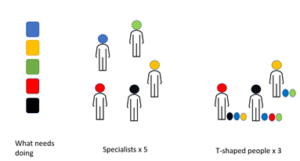 If people only know a single skill, then developing your product or delivering your service requires as many people as skills. If team members possess more than one skill, then you will almost certainly need fewer people.

The added benefit of fewer people with a wider world view is in communication and understanding context. Communication in teams of specialists very often involves a manager or project manager acting as a conduit.

Does this mean the day of the expert is dead?  Of course not. Experts will always be needed for certain tasks but they also have a crucial role to play in overcoming bottlenecks. For example, a particular task (let’s say security approval) may be blocking overall progress due to its dependencies that allow other actions. Often the best person to work on the unblocking task is the person who can complete it the fastest. You guessed it: the expert. Indeed, experts are a most desirable group of people when it comes to clearing bottlenecks.

The latest version of SFIA (v8) has embraced T-shaped individuals in defining roles. SFIA defines the skills and competencies required by professionals who design, develop, implement, manage and protect the data and technology that power the digital world. SFIA acknowledges that there is no industry definition of T-shaped. Still it states that, “You can map any approaches to role design, working patterns, career development using the existing components of the SFIA framework”.

To incorporate SFIA skills and levels of responsibility into the T-shaped model it recommends that the vertical bar of the T should list the things you have to be able to do that can be described by SFIA skills & levels or levels of responsibility. The horizontal of the T should be the things you need to know where an increased or in-depth knowledge is required for the items in the vertical. On the outer edges of the horizontal line, it is sufficient to be aware of concepts, processes, tools and how they fit your role.

Don’t forget that itSMF UK’s own Professional Skills Management Framework (PSMF) is underpinned by SFIA 8 so it too can help to define and develop those T-shaped service management roles.

It’s fairly clear that planning for T-shaped people in your organisation can only be seen as a positive. Letting them develop by accident has a similar effect but it is both slower and more haphazard than the planned approach. It’s time to embrace the Jack of all trades; they may very well be the key to your success. 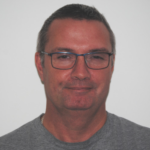 Barry Corless is Director Consulting Expert at CGI and a former Chair of itSMF UK.